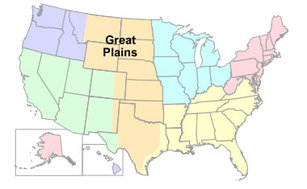 The orange section on the map is the Great Plains area.
The Native Americans of the Great Plains, especially the Sioux Indians, had a strong belief in spirits.  They believed that spirits existed underwater and controlled plants and animals. To them, Thunderbirds, the spirits of the sky were the most powerful.  They honored the spirits by creating medicine pipes, or medicine bundles, as well as having religious ceremonies.

Medicine men were also very prominent figures in Native American traditions.  They would heal people using the power of the spirits.  In our project, we used an interview by the famous medicine man, Black Elk, to learn more about them. Black Elk states that they do not use the word tradition" and say that it is too open of a word to describe their practices.
You can find this interview with Black Elk here.

Women took care of the children, made the family's clothes, cooked, made soap, made candles, and made quilts.
Men could be many different things.  They could be hunters, warriors, storytellers, or a recorder.

Men could have multiple wives.  Some only wanted one, while others wanted multiple.  During the marriage season, men would ask five or six women to marry them.  Usually, only two or three would accept.  The man would have to give each of his wives a horse.  This would seal the marriage.

When a baby was born, they had a celebration, the celebration could last up to four days.  When they were born, they were given nicknames instead of names.  As they got older, additional nicknames were added.  If the children did something bad, they could be given a nickname that could embarrass them for the rest of their lives.  For education, girls were taught by their mothers and boys by their fathers.  The children were very well looked after by the whole village.  After all, they were the future of the village.