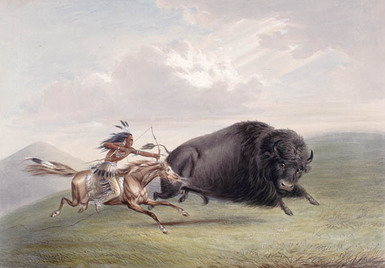 Plain Indians more commonly hunted big game, than they fished.  Buffalo were their main source of big game, as it was abundant in their area.  Buffalo were fierce creatures, so the tribes would have to use many different techniques to capture and kill the animals.

Gathering means to collect food from the environment around you.  Plain Indians would gather everything from vegetables to fruits.  This was less common due to the difficulty of finding the food, and the chance it was inedible, or worse, poisonous.

Farming was a viable and very common source for food.  Native Americans had 3 main types of food they would collect:

Pumpkins were also grown sometimes too.  Plain Indians even built a basic economy with food too.  They would trade different crops between tribes in place for more food or other resources.

This was the least common source of food for Plain Indians.  At the time, there were few domesticated animals for Native Americans to raise.  As a result, they more commonly followed herds of wild animals like buffalo instead.  This caused them to be a nomadic type of people.