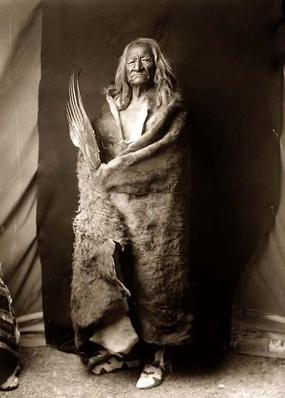 The Clothes of the Plain Indians were mainly made from buffalo and deer hide. The women would mend the clothes. Cots and robes were made to keep them warm during the Winter months.

The clothes the women wore were made from buffalo and deer hide.

Young girls wore breech clouts. When they reached adolescence they began wearing more loosely-fitting dresses. These were stitched from deerskin, which was also decorated from beads, fringes, and small pieces of metal.

The boys wore very little until the age of 10. At that age they wore breech clouts. Those breech clouts were made from deerskin. It was fastened by a leather belt. When the weather turned cold, the men changed their clothes to robes and high boots all made from buffalo hides.

Both Male and Female Clothing:

The men and women both painted their faces, bodies, and scalps with bright colors, which was made from the juices of fruits and berries. The men pierced their own ears and grew their hair out long and put them into two braids. The hair was also decorated with leather, strips of animal fur, or with a single feather. The women however had much shorter hair then the men of the group.

Their clothes were stored when not used. They were stored in a parfleche. A parleche is a strong leather pouch, made from hides of buffalos.

The clothes were also stitched and held together by thread made by buffalo sinew.

The hides could have been made from two ways by the women. They could either be tanned or just taken as raw material. To tan the hide, the women would scrape off  hair from the pelt and soak it in a mixture of brains and liver. 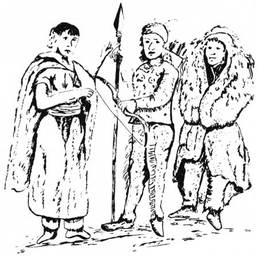